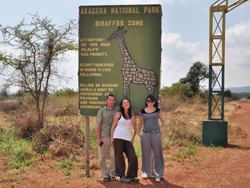 Akagera  park lies in eastern Rwanda, hugging the border with Tanzania. It’s characterized by woodland, swamps, low mountains and savannah. The varied terrain shelters wildlife including zebras, giraffes, elephants, lions and hundreds of bird species, such as the rare shoebill stork. In the southern part of the park, vast Lake Ihema is home to hippos and crocodiles.

Set at a relatively low altitude on the boarder with Tanzania, Akagera National Park is characterised by sweeping grasslands and rugged acacia woodland, interspersed with a labyrinth of swamps and lakes that follow the Akagera River, the most remote source of the Nile. This breath-taking landscape is an exhilarating change from the magnificent rainforests that dominate most of Rwanda.

Akagera provides a real eye opener to the wonders of the flora and fauna of the African bushland, with herds of elephant and buffalo emerging from the woodland to drink at the lakes. An observant visitor may also spot a stealthy leopard, hyena or pride of lions resting in the cool shade provided by the feral acacia trees.

Akagera National Park is almost bursting with more then a dozen species of antelope, most commonly the handsome, regal impala, but also oribi, bushbuck, tsessebe and the world’s largest antelope, the striking Cape eland are resident within the park.

Known as one of the most scenic savannahs in East Africa, the game drive in Akagera provides you with the opportunity to also view gentle hills blending beautifully with lowland swamps and water bodies.

The boat trip in the Akagera at Lake Ihema will reward you with a large number of Hippos,Nile crocodiles, plus many water birds and correction of reptiles.

Camp sites in Akagera for the more adventurous or for those traveling on a budget with beautiful views and night wildlife songs. >> Book Now