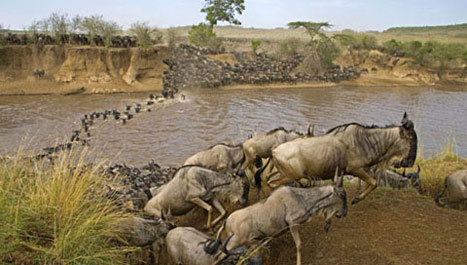 Kenya’s most popular nature reserve is renowned for its impressive number of big cats, most notably lions, though you may spot the odd cheetah as well. The Serengeti plains, irrigated by the River Mara, make up much of the park and sustain huge populations of migratory animals, including wildebeest, giraffes, and zebras. 4WD safaris at different times of the day will ensure you get the most out of your visit.

Wildebeest traverse its plains during their annual migration. The landscape has grassy plains and rolling hills and is crossed by the Mara and Talek rivers. The area nearby is dotted with villages (enkangs) of Maasai people.

Maasai Mara is situated in south-west Kenya and is one of Africa’s Greatest Wildlife Reserves. Together with the Serengeti National Park in Tanzania, it forms Africa’s most diverse, incredible and most spectacular eco-systems and possibly the world’s top safari big game viewing eco-system.

Made famous by the abundance of the big cats, Lion, Leopard, Cheetah and the Great Wildebeest Migration and the Maasai people, well known for their distinctive custom and dress.

Safaris including the Maasai Mara are without a doubt some of the best you ever get. To get the best out of your safari time, try a book at a seven-day safari at least and cover two or more other destinations.

The Maasai Mara National Reserve is near the Kenyan shore of Lake Victoria in the country’s south-west, the border with Tanzania forming one edge of the park. You can reach the reserve by car in about 6 hours from Nairobi, or land at a local airstrip. Well-equipped lodges and campsites ensure “roughing it” is a relative term here.