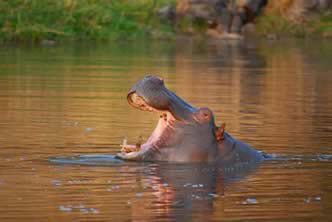 The largest national park in Tanzania.  In 2008 the Usangu Game reserve merged its borders with Ruaha transforming it into Tanzania’s largest national park; it now covers more than 20,000km². Despite the size of the park, there are still only a handful of camps found here, which has built Ruaha’s reputation as Tanzania’s best-kept game viewing secret. Ruaha’s wild and untrammelled feel is what sets it apart from other reserves, making it a popular choice for regular east African safarigoers.

The wide distances of Ruaha National Park have a drama and atmosphere quite unlike any other Tanzanian park. Here the land has its own kind of remoteness that seems to emanate through time itself.

It is an ancient place, where mile upon mile of sandy red earth feels worn and bleached by an age-old sun, and the hilly distances are punctuated with distended elephant-battered girths of countless massive baobabs that live for a thousand years. Such a charismatic combination of ochre-red earth, pale russet grasses and the parched paths of wide sand rivers appeal to all the old preconceptions of an age-old African land.

The fantastically unspoiled reaches of Ruaha are a result of its location, which makes an expensive flight or a long drive necessary to reach it. The park is consequently hardly visited by tourists and remains underdeveloped with major tracts still largely inaccessible.

Such a vast and fascinating landscape makes it an ideal location for a longer safari, with between four and seven nights recommended, not least to make the flying costs worthwhile. Trips to Ruaha are often combined with the Selous Game Reserve, as the two locations are entirely complimentary for their differences and part of the same scheduled flight route.

The joy of Ruaha is that there are hardly any people there at all, but plenty of heavy-duty wildlife lays claim to its hilly savannah and bush. Ruaha has one of the greatest populations of elephants in any African park, and the dry open hillsides encourage antelope and buffalo to gather into large herds. This terrain is particularly good for seeing predators, especially lion, and potentially leopard, as well as packs of African hunting dogs and numerous giraffe and zebra.

Ruaha is the only east African park with both Greater and Lesser Kudu, and sable and roan antelopes and, like the Selous, has an unusual combination of East and Southern African wildlife and birds

This is by far the most dominant geographical feature of the national park and, for the wildlife, it is the most important. Ruaha has a hot, dry climate which means the animals don’t tend to stray too far from dependable water sources. This makes predicting game movements far easier particularly in the dry season.

The best game viewing in this national park is generally from May to November, but the bush is greener and prettier from January to June, and birding peaks during the European winter months of December to April.    >> Book Now