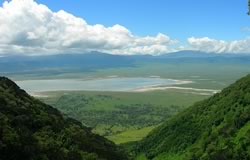 The famous Ngorongoro Crater is the world’s largest intact caldera in an exceptional geographical position. The  crater sinks to a depth of 610 metres, with a base area covering 260 square kilometres. , the stalking ground of around 20,000 to 30,000 wild animals at any one time.

The crater floor consists of a number of ecological environments that include grassland, swamps, forests and Lake Makat, a central soda lake filled by the Munge river. All these various habitats attract various wildlife to drink, wallow, graze, hide or climb. Although animals are free to move in and out of this contained environment, the rich volcanic soil, lush forests and spring source lakes on the crater floor tend to incline both grazers and predators to remain.

Ngorongoro Crater is also presently one of the most likely areas in Tanzania to see the endangered Black Rhino, as a small population are thriving in this idyllic and protected environment – one of the only areas where they continue to breed in the wild. The crater forms an astonishing microcosm of East African wildlife within its boundaries, and is said to be the most densely packed wildlife concentration in Africa.

As such, Ngorongoro Crater has achieved world renown, and attracts a growing number of visitors each year. Even if time is limited this natural but accessibly small caldera ensures a rewarding safari.

Unique and diverse, inside the famous Ngorongoro Crater a tardis like effect takes place as it is surprisingly small once inside! Most people find that one day is quite sufficient to enjoy the place. Its size compared to the vast expanse of the Serengeti means that you may see many other vehicles.

Its rim, over 2,200 metres high, touches swathes of clouds for most days of the year, with cool high altitude vapours that seem to bring a clean lightness to the air, and also a chill. These highlands wake up to a misty fog in most months, other than the high dry season during December and January.

The Ngorongoro Conservation Area (NCA) is an extensive highland area along the eastern arm of the Rift Valley, with the world-renowned Ngorongoro Crater as its focal point. It is not a national park in the strict sense of the word, but the NCA was established to conserve wildlife and other natural resources.

It also safeguards the interests of indigenous people and promotes tourism. Thus, guests on safari have the unique experience of seeing Maasai herdsmen whose cattle graze side by side with the tremendous variety of wildlife found in the area.

Unmatched for its natural variety, there are few places on earth where such a tremendous diversity of landscapes exist inside a region this size.Apart from its wildlife riches, the NCA is also of great archaeological importance, with the remains of some of mankind’s earliest ancestors discovered in the area.

The largest intact caldera in the world, the Ngorongoro Crater shelters one of the most beautiful wildlife havens anywhere. A permanent population of more than 30 000 animals inhabit a mere 260 km² (100 square miles) in the 600 m (2 000 ft) deep crater, making this one of the few places in Africa where guests stand a great chance of seeing the entire Big Five in the course of a single game drive.