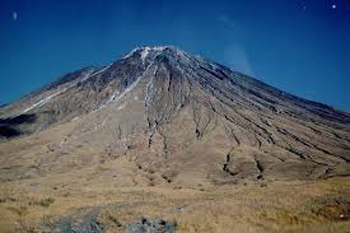 Ol Doinyo Lengai, “Mountain of God” in the Maasai language, is an active volcano located in the Gregory Rift, south of Lake Natron within the Arusha Region of Tanzania, Africa. Part of the volcanic system of the East African Rift, it uniquely produces natrocarbonatite lava

Mount Oldoinyo Lengai is of particular interest to geologists because it is the world’s only active volcano that erupts natrocarbonatite lava.

It is also the only active volcano in this part of the East African Rift Valley, though there are many older extinct volcanoes in this region.

Mount Oldoinyo Lengai (Mount Oldonyo Lengai) rises about 2000 metres above the Rift Valley floor to a height of approximately 2886 metres.

Ol Doinyo Lengai (Oldonyo Lengai) is a volcano located in the north of Tanzania and is part of the volcanic system of the Great Rift Valley in Eastern Africa.

It is located in the eastern Rift Valley, south of both Lake Natron and Kenya.

It is unique among active volcanoes in that it produces natrocarbonatite lava, a unique occurrence of volcanic carbonatite.

Further, the temperature of its lava as it emerges is only around 510 °C (950 °F). A few older extinct carbonatite volcanoes are located nearby, including Homa Mountain. >>