For many people, timing their Masai Mara Safari to coincide with the migration seems vital – but with a very abundant and healthy resident population of animals, a holiday to the Masai Mara is great at any time of the year.

The word Mara means “spotted”. One thought is that this relates to the landscape, which is patched with groves of acacia and thorn bushes, but it is more likely that it was named for the speckled inundation of wildebeest and million other herbivores during the migration. With its rolling grasslands and wide-open savannah, the Masai Mara is the kind of African landscape that you see in the movies!

Predators also prevail in the Mara and include large pride of lions, a fair number of cheetahs and leopards, spotted hyenas and silver- or black-backed jackals.

Met upon arrival at Jomo Kenyatta International Airport Nairobi (J.K.I.A) by Animal World Safaris meet and greet service representative who will brief you on your safari in Kenya and depart by road for Masai Mara Game Reserve also known as The 7th Wonder of the World because of the Great Migration, witnessed every year between June and September when millions of wildebeests and zebras cross Mara River from Serengeti National Park in Tanzania to Masai Mara Game Reserve in Kenya in search of food and water and it is famous for its wide variety of flora and fauna to arrive in time for lunch. In the afternoon you will have a game drive where you may have a chance of seeing the ‘Big Five’, different varieties of birdlife and the best savannah vegetation in the world. Return to the Camp for dinner and overnight. 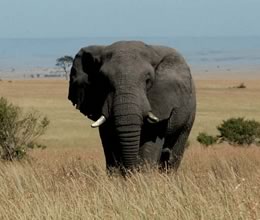 Morning and afternoon game drives in the Maasai Mara. Meals and overnight at the Camp.

On this day of your Kenya safari, you will depart after an early breakfast by road for Lake Nakuru National Park which supports a wide ecological diversity of flamingos and other water birds stopping at Nairobi for lunch. After lunch, you will drive through the scenic floor of the Great Rift Valley. You will have a game drive in Lake Nakuru where you may have a chance of seeing the white and the black rhinos which are endangered species in Kenya, the rare Rothschild Giraffe, Lions, Waterbucks and the Leopard which is a shy animal. Dinner and overnight at Lake Nakuru.

On this day which is the last day of your Kenya safari, you will return to Nairobi. Lunch and dinner own arrangement. You will thereafter be transferred to Jomo Kenyatta International Airport (J.K.I.A) in time to connect your flight.