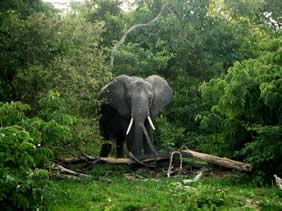 It’s about three times the size of South Africa’s Kruger National Park, and twice the size of the Serengeti National Park. In a fitting tribute, it is also one of Tanzania’s three World Heritage Sites.

The spectrum of wildlife is equally diverse, all the more interesting because its southern location attracts a unique combination of East and Southern African wildlife, both resident and migratory, and particularly a curious and colorful assortment of over 440 known species of birds!

The vast area contained within the reserve boundaries accounts for 5% of the landmass of Tanzania, and yet all options for tourists are high quality, low-impact lodges that provide a high standard of accommodation.

The freedom to take walking and boating safaris within the conservation area means that guiding standards are also especially good and can extend to include excellent options to fly-camp overnight in the bush.

Covering almost 50,000 square km, an area greater than the size of Switzerland, the Selous game reserve is one of the largest areas set aside for wildlife preservation anywhere in the world, although only the small northern portion is allocated for photographic tourism.

This is an area that naturally appeals to a photographic lens, as the waterways and plains reflect all the changing colors of the sun and attract numerous well-feathered water birds and raptors.

The scenery is pleasantly varied, with unusually green grasses and tangles of vegetation, and inspires a film depleting string of photographic moments with each turn in the path. The river routes are characterized by legions of tall Borassus Palms along the banks that grow up to 25m tall and leave a tall headless totem when the watercourses change direction and they become too thirsty to survive.

The same demise is thought to explain the spooky silhouettes of ancient leadwood trees that remain preserved intact when they die after up to two millennia of life, leaving a skeletal perch for songbirds and raptors that retains a perfect yet utterly lifeless photogenic poise.

The Selous conserves a surprisingly colorful African landscape, and the white forms of the leadwood are in stark contrast to the surrounding vibrancy of well-watered greens and a ranging palette of sandy terracottas that reflect the moods of the sun on the waters.

The many intricate waterways and tributaries developed by the ever indecisive Rufiji River Delta attract a healthy population of elephants and are packed full of grunting hippopotami and yawning crocodiles that lumber ominously into the water at the first sound of a boat. The banks attract different sized herds of plains game depending on the season, as herds disperse after the rains and then regroup when the water sources concentrate and they are forced to venture into the open to drink, so risking predator attacks with the protection of the crowd.

Introduction to a Selous Safari

At the heart of the Selous Game Reserve, Tanzania’s largest river, the Rufiji, forms a complex network of channels, lakes, and swamps that create one of the most outstanding ecological systems in East Africa. This river also splits the reserve into two different sections: