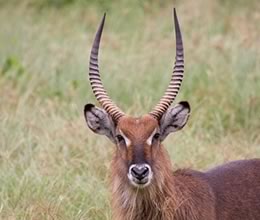 The first thing you’ll notice on your Samburu Safari is that it is worlds apart from the other parks in Kenya. It is a hot and arid area characterized by a parched landscape of hills and plains. Good news for the safari enthusiast is that the refreshing waters of the Ewaso Ngiro River run through Samburu and attract plenty of wildlife.

Samburu is home to large herds of elephants and elusive leopards. It is also well known for providing the opportunity to see wildlife that only lives in the dry north of Kenya. Your safari wouldn’t be complete without seeing a gerenuk – an odd yet distinguished gazelle with a long neck, which stands on its hind legs to feed.

For many people, timing their Masai Mara Safari to coincide with the migration seems vital – but with a very abundant and healthy resident population of animals, a holiday to the Masai Mara is great at any time of the year. With its rolling grasslands and wide-open savannah, the Masai Mara is the kind of African landscape that you see in the movies!

Day 2:  Full day of game viewing in the park famous as the place for the Samburu semi-nomadic tribesmen, the reticulated giraffe, the Grevy’s zebra gerenuk, beisa oryx and a host of the big game including elephant and lion. Meals and overnight at the permanent camp.
Day 3:  Morning drive south towards Lake Nakuru National Park. Lunch at Nakuru before proceeding for an afternoon game drive in the Park.

This is a shallow soda lake which inhabits more than a million flamingoes. The Lake Nakuru National Park also has a Rhino sanctuary. Other animals to be seen here are a lion, buffalo, waterbuck, warthog, and hippo. Dinner and overnight at a camp at the Park.Dinner and overnight at Campsite
Day 4:  After breakfast leave for Maasai Mara Game Reserve, arriving in time for lunch. After lunch proceeds for an afternoon game drive in the game reserve which is Kenya’s finest wildlife sanctuary. Including migrants, well over 450 species of animals have been recorded here.

Although July, August, and September are the months when the Mara plains are filled with migrating wildebeest and zebra, there is also resident wildlife year-round. The famous Maasai tribesmen live within the dispersal area of the game reserve. Dinner and overnight at the Camp.
Day 5:  Morning and afternoon game drive in the Maasai Mara National Reserve. Meals and overnight at the Campsite.
Day 6:  Morning and afternoon game viewing in the park. Meals and Overnight at Campsite.
Day 7: Return to Nairobi arriving around noon.>> Book Now