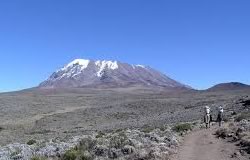 Mount Kilimanjaro , with its three volcanic cones, Kibo, Mawenzi, and Shira, is a dormant volcano in Tanzania. It is the highest mountain in Africa, with its summit about 4,900 metres from its base, and 5,895 metres above sea level

Mount Kilimanjaro is the crown of Africa. The view of this majestic mountain’s gigantic snow-capped summit dome, rising high above the surrounding savannah is the one of Africa’s classic images.

The attraction is even greater because with time and preparation, it is possible to walk all the way to the summit without technical mountaineering equipment or experience.

The top of Kibo dips inwards to form a crater which cannot be seen from below. Although Mount Kilimanjaro lies just three degree south of the equator, both Kibo and Mawenzi have permanent caps of snow and ice.

The highest point on Kibo and the whole of Kilimanjaro massif is Uhuru peak. Also on Kibo is slightly lower peak of Gillman’s Point, both are goals for most trekkers. The peaks of Mawenzi are for mountaineers only Kilimanjaro has been designated as a National Park by the government of Tanzania.

Climbers usually spend between 6 to 10 days climbing Kilimanjaro, depending on the pace and route taken. Overnight stays are spent at climber’s huts at each stage, equipped with bunk beds and water and beer at the early stages.
We organise for you to climb with a knowledgeable guide, porters and a cook for delicious meals at the end of each climb.

Below are details  of the more popular routes:

Marangu route 5 Days
The Marangu Route is the most popular route, being the least strenuous. Recently paths have been defined through the forest to make the walk easier in places, although it remains a difficult climb in places. The route is very scenic and varied as it moves through the different altitudes.

Machame route 6 Days
The Machame Route is even more scenic than Marangu, and is much wilder and more natural as a result of being steeper and thus less visited.

Lemosho Route, 8 Days
This is the most remote route to reach the summit of Kilimanjaro. After taking you through beautiful forests and moorlands, it crosses the Shira Plateau to meet up with the Machame Route.

Rongai Route, 6 Days
This route is considered by many as the easiest route to reach the Summit of Mount Kilimanjaro. The route ascends from the north-eastern side of the mountain, along the border between Tanzania and Kenya and offers a different perspective due to its unspoilt wilderness and natural beauty.

There are a number of climbs up Kilimanjaro besides those listed above. We can arrange for you to experience the less popular routes, but will have to discuss the options personally. A Kilimanjaro climb costs between $1,900 and $5,500 depending on the route chosen, number of people and nights spent on the mountain.