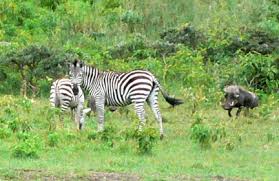 Only an hour’s drive from Arusha, the park is usually forgotten in the rush to reach the Serengeti, but it is certainly worth a visit, especially for bird-lovers – over 570 bird species have been recorded.

Visitors to Arusha National Park can also climb Mount Meru. At 15000 feet, it’s the fifth highest mountain in Africa and the ascent to the summit is a tough four-day hike. On the way, you’ll pass herds of buffalo and giraffe and look for colobus monkeys in the trees. At the summit, you can watch the sunrise behind Kilimanjaro.

The main features are Ngudoto Crater, the Momela Lakes and Mt. Meru. The entrance gate leads into a shadowy montane forest inhabited by inquisitive blue monkeys and colorful turacos and trogons – the only place on the northern safari circuit where the acrobatic black-and-white colobus monkey is easily seen.

The flora and fauna vary with the topography, which ranges from forest to swamp. Further north, rolling grassy hills enclose the tranquil beauty of the Momela Lakes, each one a different hue of green or blue. Their shallows sometimes tinged pink with thousands of flamingos, the lakes support a rich selection of resident and migrant waterfowl, and shaggy waterbucks display their large lyre-shaped horns on the watery fringes.

Giraffes glide across the grassy hills, between grazing zebra herds, while pairs of wide-eyed dik-dik dart into scrubby bush like overgrown hares on spindly legs.